Day 2 of Kidless Week – Getting better every day

Categories
Tags
The Kid text me last night to let us know he was feeling a LOT better.  His stomach ache was gone and his head didn’t hurt.  He still had a bit of an earache, but overall things were wonderful in comparison.  Which meant that I had a much better night’s sleep and a very good day at work that was worry free. 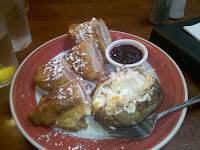 Although last night was a quiet night at home, tonight we spent some time with friends (who are also kidless).  I splurged like crazy and had a Monte Cristo sandwich which was TO DIE FOR!  I’ve never had one before.  When I told some friends at work where I was eating, they mentioned this delicious meal and after they said ham, cheese and fried dough, I was sold.  The rich filling of ham and turkey was layered with two different cheeses and placed on two slices of fresh bread.  This concoction was then dipped in a batter and fried to a golden brown.  To top it off, they sprinkled it with powdered sugar (kind of like a doughnut) and served it with a side of raspberry jam.  Oh! My! Gosh!  Yummo.  My stomach is full.  I have no idea how many calories were in this dish (and couldn’t find it on the net).  So, I’m not worrying about it tonight.

The next few days will go pretty fast between work, cleaning and picking the in-laws up at the airport.  Oh and I’ll be hosting another blog hop, so stay tuned for another chance to win some gift cards.
That’s me.  Although the week started off rough, I have to admit it is getting better…  It’s good to be me.
Share
0