Where in the World is… Tami Brothers! #PFHT

Categories
Tags
The writing world is filled with twists and turns, hills and mountains. The one constant through it all is the friendships one makes along the path.  I’m blessed to say that I have met a few great people.  One such awesome person is author Hildie McQueen. She has hosted me on her blog several times and featured my book as one of her Tea and a Book reads.   I’m thrilled to be able to return the favor with her latest release.
Welcome Hildie!
~~~
The second in the Protector Novels is available for sale today! 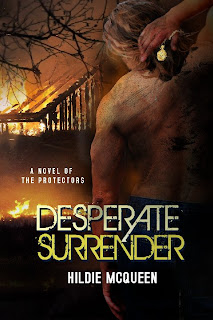 I began to write Desperate Surrender, but stopped because Kieran, the hero was silent. I could not figure him out and got so frustrated I wanted to kick the Scot back to Scotland! Then I did what I always do when wanting to hear from a character, I went on a long drive, an eight-hour drive to be exact. There is a scene in the book that I had to get directly from Kieran in order to write.  And boy did I. When I finally broke through it became so emotional that I pulled over and cried for him.

When you read the scene in which Kieran finally decides what he must do, I hope that I conveyed the emotions in a manner that will make you desperately want this hero to have his happily ever after.
I am proud to announce Desperate Surrender, Kieran Fraser and Wendy O’Sullivan’s story…
Buy Desperate Surrender on Amazon (Kindle)
Buy Desperate Surrender at Barnes and Noble (Nook)
GIVEAWAY!  Enter to win one Amazon Gift Card and a free copy of Desperate Choices, the prequel to the Protector Novels.
a Rafflecopter giveaway
~~~ 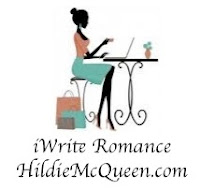 Bio: Hildie has lived all over while serving in the army or later as a government contractor.  Now she makes her home in beautiful Georgia with her husband and two spoiled Chihuahuas, Pancho and Pepito.  Her favorite pastimes are traveling, photography and of course writing.