Repost – Reevaluation of My Last Decade

Reevaluation of My Last Decade

This time ten years ago I was standing at the open door of a cargo plane waiting my turn to jump out into the crisp cool Colorado sky.  Unlike here in Georgia, the mountains in the Midwest are cold and unpredictable.  This particular day the clouds were blowing in and a storm was brewing.

When my turn finally came, the weather made it impossible to go up as high as the jump school normally takes their clients.  I was given the choice to jump from the lower altitude or return to base, get my money back and try again another day.

You better believe I jumped and it was the most exhilarating experience of my life.  The wind was rigid and ice crystals stung the exposed skin of my face when we dropped through the clouds.  After pulling the cord, my tandem instructor kept us floating in the sky far longer than the others in our group.  Where I had expected a roaring of the wind, instead it was calm and peaceful.  At that moment, I had an epiphany that has since stuck with me. 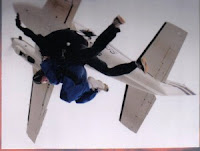 I was turning twenty-nine that year.  As with most twenty-somethings, I felt like I needed an over-the-top act to commemorate the dawning of a decade.  Hence the skydiving.  Because my twenties were much better than my teens, I bought into the myth that the twenties were the ultimate in life and I was certain that anything later would never compare.

Of course I was wrong.  This month I’ll be thirty-nine and I can say without a shadow of a doubt that the last decade was nothing like the previous one.  In fact, it has been better than anything I could have ever imagined.

My epiphany that day was that no matter what I wanted to do in life, I had to try it to achieve it.  I was attached to a parachute thousands of feet in the air, snow falling all around me, a silence I’d never dreamed was possible.  That’s when it hit me that this over-the-top act had been all about me.  I had planned this from start to finish.  I had defied those who thought I was nuts for trying it.  I had ignored the naysayers who felt I was selfish for putting my life in danger when I had a small child at home.  My husband completely refused to try this with me.  Because I had dreamed of it for so long, I pushed beyond my comfort zone, took the lead in my own life, and made jumping a reality.

Yes.  It is easy to let others dictate our next move.  All the risk is put on someone else and if we fail, it isn’t really our fault.  But I realized that day that if I truly wanted something in my life, I had to make it happen.

Since then, I’ve used this philosophy on many other things.  I had to bring my dream of writing out into the light of day.  I had to drag my butt out of my nice comfy home and face Atlanta traffic to attend the GRW meetings.  I had to make the decision to apply for that dream job.  And in doing so, over the course of ten years, I’ve found myself acting braver and more in tune with what I want from my life.

For our Year of Reevaluation, my family has made a lot of changes.  But what I’ve discovered most of all from this process is that if I am not willing to change certain things in myself along the way, then the changes we implement in our physical lives will not stick.  The goals we are achieving now will not last.  Hubby and The Kid are seeing small bits of this with themselves, but I don’t think they’ve had as big of an AHA moment as I have.  That’s okay.  We are well on our way to achieving a better balance and hopefully, it will carry over when needed most.

I try to do something each month that reflects our goal of change, so with this month focusing on my personal growth and looking toward the future, I decided to update my bucket list.  In looking back, I realized just how superficial I have been and have decided to add some depth to the list.  A few additions have been to take in the whole experience of the things I already have listed.  Instead of just going to the beach, I want to follow in Marilyn Baron’s shoes and see baby turtles migrate to the water.  I want to follow in Susan Carlisle’s shoes and instead of just seeing the Grand Canyon, I want to hike down inside (or ride a mule J ).  Instead of just living each day til the next birthday, I want to follow in Pam Asberry’s shoes and celebrate each day for what it is and allow the little experiences to impact my life.  These and many others have been added and although I still have a year before I turn forty, I look forward to the coming decade with hope and excitement.  After all, as experience has shown, life just keeps getting better and better.

To see some of the other changes my family has made this year, check out the following links as we’ve turned our lives upside down as we search for balance.

What about you?  What were your thoughts as you entered a new decade of your life?  Did you stress about getting older or did you look forward to the changes life had in store for you?

Stop back by Monday, October 3rd when I write about how making friends outside of our family circle has enriched our lives beyond anything we’ve done thus far.

Have a great September!