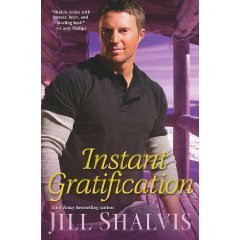 Emma Sinclair thinks she’s returning to Mayberry USA, aka Wishful, California, to run her father’s medical clinic while he recuperates from a mild heart attack. Compared to her ER shifts back in New York, this should be a piece of cake. What she didn’t count on was her father not giving her the full story of his almost certain brush with death, the citizens of Wishful ignoring the fact that she was indeed a “real” doctor, and the horrors of no Starbucks or Thai take-out restaurant for miles. Hell, there wasn’t ANY fast food period. But that was nothing compared to what she encountered with Stone Wilder. The man was hotter than hot and wilder than his name implied. At least that’s what he led her to believe. When she starts to peel away the layers and sees the real man behind the ski and mountain bum façade, she finds a solid guy who happens to be the backbone keeping his family together. But is he enough to keep the big city girl rooted and happy in a po-dunk town? Who knows, but he’s doing a bang up job of keeping her doctor skills sharp!

Stone Wilder has no idea the chaos Emma is about to impart on his orderly world. Okay, so the “razor tongued, cool-as-a-cucumber snooty doctor” wasn’t the epitome of “Dr. Evil” he originally thought her to be. It’s true she wielded a needle like a pro and that just the thought of needles made him faint, which would repel most sane men. If only he could keep his accident prone body out of her clinic! What he doesn’t expect is to find that Dr. Emma Sinclair is good for more than just erotic dreams. When he sets out to help the uptight doctor learn how to be more relaxed, he winds up loosing his heart. But she’s still a big city doctor and he’s, well, he’s still Stone Wilder with his life and family firmly rooted in the Sierras. Is there any possible way the two can find a happy medium in this crazy world they’re sharing? Or will Emma be like her mother and leave this po-dunk town without a backwards thought to who she left behind?

Jill Shalvis is a brilliant story teller. No matter which book of hers I pick up, be it a shorter Blaze story or her longer Brava novels, I know I’ll be immersed into the brilliant settings as well as the drama happening with her characters. Instant Gratification is the second book in a trilogy about the Wilder brothers and their outdoor adventure/expedition company that the three men run in the California Sierra Mountains. Right from the start, I felt like I was a part of this magnificent country, sweating in the sweltering heat engulfing Emma and cringing from the pain and nausea as Emma stitches up some cuts Stone received after saving a man from falling to his death off a cliff. Ms. Shalvis has a knack for putting it all into her books and making the reader feel like they are living it right along side the characters.

Emma and Stone have a love/hate connection right from the beginning and one that left me wondering just how they were going to make it through to the end. If there was any question about how opposites can actually attract, Ms. Shalvis puts it right out there in black and white, leaving anyone who doubted the relationship could work to wonder why they didn’t see it in the first place. If you don’t believe me, just stop by Ms. Shalvis blog. There you will be entertained with her “I Love Lucy” stories and hilarious tales of her wild and crazy hikes with Ashes and Mountain Barbie. I will definitely be grabbing Cam’s story (Instant Attraction – that came out in February) and will be waiting (very impatiently) for the final chapter of the Wilder brothers’ series with TJ’s story.