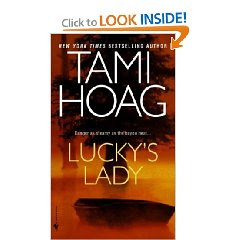 Serena Sheridan is definitely out of her element. As a psychologist in Charleston, Louisiana, she isn’t used to being manhandled by shirtless, hunky men. In fact, she’s known for being able to stop a guy in his tracks with just a look alone. But she’s no longer in Charleston and if she wants to find her ailing grandfather before he does something seriously stupid, Lucky Daucet is her only chance at maneuvering the Atchafalaya Swamp here in South Louisiana.

Her first impression of raw power is a more accurate description of the man than she could ever have imagined. Unbeknownst to her, her grandfather’s health isn’t the only thing in danger. Now that she’s back home and Giff has put the decision of keeping or selling their ancestral home in her hands, someone’s afraid their plans to buy out and then tear down Chanson du Terre is rapidly dwindling. And they don’t want to be stopped. As Serena is drawn deeper into the mystery, she’s also drawn to her unwilling protector. Can she save herself from a killer bent on destroying everything she’s ever known, while protecting her heart from a man who doesn’t want it?

Lucky Daucet was perfectly satisfied with the way his life was going. He was fine handling the company wanting to destroy his swamp all on his own. Then his friend, Giff, goes and throws a wrench into everything by manipulating his granddaughter back to South Louisiana. If that wasn’t enough, the old coot kicks the girl out of his fishing shack, leaving her to face the elements of the swamp along. With night closing in around them, he has no other choice than to take Serena back to his home. Not only does this end up opening up a piece of his world to the sexy doctor, but also a piece of his soul. Now everything is riding on Serena’s decisions. His home. His swamp. And now his heart.

This week I decided to review an older book on my bookshelf. When I say older, I mean way back to 1992. Lucky’s Lady is the very first romance book I bought. As full blown suspense reader, I hadn’t thought about jumping into the area of romance. Heck, at that time, I didn’t even know there were different genres. It wasn’t until a Wyoming snowstorm that I found myself without very many options. A friend of mine had this book in her bag and offered to lend it to me while I stayed at work during my lunchhour. By the time the day was over, I was dying to get to the store so I could see how it all ended. Thank heavens for 4-wheel drive….

As soon as I read this story, I was immediately hooked. It was sexy, suspenseful, had fabulous dialogue and an awesome visual of the location. I was right there in the swamps of Louisiana swatting at mosquitoes (a long way away from that two feet of snow we ended up with). Tami Hoag introduced me to a whole world that was completely different than anything I had ever imagined. It was this book that opened up my love of reaching that Happily Ever After and this book that sparked the desire to create my own stories. If you ever get a chance, I highly recommend finding and reading Lucky’s Lady. It’s timeless and something that could easily be relevant in today’s world. I haven’t been disappointed any of the numerous times I’ve read it and neither will you.