YouTube – Response to If I Became a Famous Author 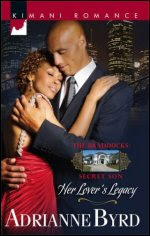 The Lover’s Legacy by Adrianne Byrd

Adrianne Byrd never fails to impress me with the many different ‘voices’ she possesses. Each time I read one of her books, I’m excited to find out which personality I’ll see once I get started. With that said, she always has a strong heroine I can totally relate to and a larger than life hero with plenty of flaws. This time was no different.

Lover’s Legacy is the first installment written by a group of authors who collaborated on The Braddocks series. After Malcolm Braddock’s father passes away, everyone expects him to step into the late senator’s shoes. Spearheading the campaign to talk him into it is Gloria Kingsley, the late senator’s executive assistant. Malcolm has no interest in taking over his family’s political reins. He would much rather fight the battle for his numerous causes on the front line and not from behind a desk. But Gloria is one tempting woman, both in the office and out of it. The attraction between the two of them leaves him completely defenseless.

Gloria knows Malcolm would be a top notch senator. She’s just not sure why he can’t see it for himself. When she sets out to prove this fact to him, she’s more than surprised at the sizzling attraction that springs up between the two of them. Once things become personal, can she keep the two worlds separate? Or will her plan for his political future tear their budding relationship apart?

With my busy schedule, I have not actively sought out any new series. I’m already an avid fan of more than 15 of them already. Because I love all of Ms. Byrd’s books, it was a given I would buy this one. What I didn’t expect was to become obsessed with the family. Adrianne Byrd does an amazing job of making me love this couple and with them, the storyline that leads into the next books. Who knew she would hook me? I’m headed to the bookstore today to grab the next installment, Sex and the Single Braddock by Robyn Amos. Who knows, maybe I’ll add a few more authors to my ‘favorite list.’