Wednesday Review – The Secret of the Dread Forest: The Faire Folk Trilogy by Gillian Summers 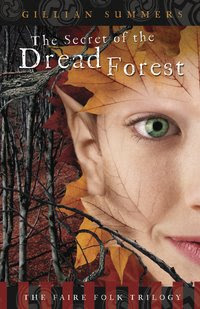 The Secret of the Dread Forest: The Faire Folk Trilogy by Gillian Summers
Keelie Heartwood finally makes it “home.” Of course, home now happens to be an elf village in the heart of Oregon’s Dread Forest. After her amazing save of the Wildwood Forest and their unicorn, you’d think Keelie would be well on her way to acceptance by the other elves. Instead, she’s treated worse than ever before. On top of that, her relationship with Sean is over because of her half elf, half human status. Then there is the spoiled Princess tree, Alora, demanding most of her attention; her enemy, Elia, wanting to be friends; the mysterious boy in the woods who knows more about her family than she does; the discovery that the unicorn killer himself, Lord Elianard, is now her teacher; her dad turning out to be the Lord of the Forest which leaves little time for her; her grandmother hating everything about her human side; and that doesn’t even take into account the age-old rift between her family and the other elves. Isn’t that enough for one teenage girl to handle? Apparently the forest doesn’t think so. They have few more surprises to throw Keelie’s way.

Gillian Summers did an awesome job of wrapping up the Faire Folk Trilogy in Secret of the Dread Forest. I’ll be honest and say I was seriously upset about Keelie’s love interest(s) right up until the very end. Thankfully, Ms. Summers did an awesome job of surprising me and I closed the book satisfied. Yet, it wasn’t until I found out the writing duo has another fabulous trilogy in the works that I was truly happy. As satisfying as the ending of this book is, I was NOT ready to say goodbye to Keelie and her mysterious world. Keep an eye out for the new series, the Scions of Shadow Trilogy, coming June 2010.