It’s hard to imagine our world before 9/11. At that time I worked for the post office in a small Wyoming town. Our biggest concern was the Anthrax scare.

I was off that day. As the mother of a young child, I opted to sleep in while hubby headed off to work. After the first plane hit, he called to tell me to turn on the TV. Still half asleep, I watched for a bit then jumped into the shower before The Kid woke up. I felt for the people living through that horrible situation, but it hadn’t touched me yet. As I was getting dressed, hubby called again. That’s when the world changed.

I was glued to the TV the whole day. The Kid wasn’t too thrilled with the lack of cartoons, but he was fine after I dug out the Monopoly money. Always a taboo for him to touch, he was in heaven with this new freedom. As I watched the horror happening a world away, I couldn’t help but think that nothing would ever be the same again. 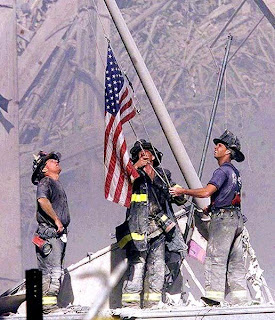 While watching the memorial yesterday, I was reminded of that thought. Ten short years later, so many things in life have changed. Some good. Some bad. But all necessary.

Please remember not only those we lost that day, but those we have lost since then fighting to keep us safe.