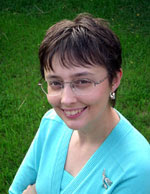 I was very excited when Trish Milburn said she would guest blog today. I’ve been following Trish’s journey to publication for a couple of years now and have been very inspired by her story. She is one of the reasons I created my own Web site. Welcome Trish!!!

Web sites and blogs before you’re published
By Trish Milburn

Well before I sold my first book, I decided that writing novels was going to be my career. And since it was going to be my career, I was going to treat it that way. I endeavored to act professionally in everything connected to my writing. At conferences, I dressed in business attire. I prepared for every meeting I had with editors and agents. I did my homework on the business side of writing. I also did what I could to create a self-fulfilling prophecy by undertaking certain types of self-promotion, including speaking at chapter meetings and conferences, starting a blog and launching a Web site. I hoped all of these things would show those in the industry that I was very serious about my career, even though I wasn’t being paid for it yet.

That said, I don’t think you have to spend a ton of money prior to getting published. You don’t have to have a top-of-the-line Web site that costs you thousands of dollars. For that matter, I don’t think an uber-pricey site is a necessity after you’re published. You just need one that looks professional. A good friend created the first incarnation of my Web site, and it served me well for several years. I had an online presence and I was able to update it myself using FrontPage. There were several things I didn’t know how to update, but I could do basic text changes. It was only after I sold four books within three months that I decided it was time for some online changes. I wanted a professional site, something with a look I could brand and that reflected the changes in what I was writing that had come about since my friend had created my first site. I really liked what I had heard about the designer who’d done the site for another friend and who designed the custom template we use on the Romance Bandits blog. I contacted her, told her what I wanted, and she was fabulous in giving me just that.

What I wanted was a site that reflected the two halves of myself – the half who writes romance under my own name and the half who writes young adult novels under the name Tricia Mills. Because my time was becoming precious, I wanted a site that I could update more easily and as often as I wanted without having to wait for someone else to do it or pay each time I wanted to change a bit of text. So Dawn at Austin DesignWorks created a new look for me in WordPress, which is very easy to update. It’s blogging software similar to Blogger, with which I was already familiar from my years of blogging. And that made it easy to move my existing blog onto my site without losing any of my past posts. Having everything centralized saved more time and hopefully exposes readers to both my blog and the other areas of my site.

I update my blog daily if at all possible. I think that’s important to keep readers coming back. If you miss a day, they might not come back the next day and you fall off the radar screen. You want to give them something interesting every day. Some blogs (like the Wet Noodle Posse blog, of which I’m a part) gives lots of writing-related content. I, however, have established more of a “friends hanging out” feel. At least I hope I have. As a reader, I like to read about the authors themselves. So what do I talk about? I post about my writing some, but I also talk about friends, my travels, funny things I’ve seen in the news, movies I’ve seen, the glamorous life of an author as she weeds her flowerbeds, and my obsessions with YouTube fan vids and the show Supernatural (and those hot Winchester boys

In addition to updates to the blog, I update other sections of my site often. I add appearance information, links to where I’m hanging out online, the latest book release news, and contests. Yes, even before I have a book people can buy at their local bookstore, I’m hosting contests to hopefully build a base of potential readers.

Having said all this, I’m not saying all unpublished authors need to go out and start a Web site or blog every single day. Do what you’re comfortable with and what your schedule allows. And if you’re just starting on the writing journey, the promotional activities aren’t as important as if you feel you’re closer to selling. Early on, just focus on the writing and perhaps start a blog to chronicle your journey. Maybe only post on it once a week, but even if you do that, it’s good to keep that one day consistent so readers know when to look for you.

Whatever you decide is right for you now, good luck with it!