Harry Potter and the Deathly Hallows. LOVED IT!!!

I’m blogging at the Petit Fours and Hot Tamales Blog

The Kid had an FFA meeting Friday morning, so we weren’t able to make it to the midnight viewing of the new Harry Potter movie.  Instead, I bought tickets (two weeks in advance) for Friday night at the new IMAX theatre (in 3D!!!).

Wowza!  I can’t tell you how awesome it was!!!  I laughed.  I cried.  I raved at the world.  And I left the theater satisfied.  Of course if the next viewing had not been sold out, I definitely would have grabbed the other three people I was with and headed back in to watch it again.

Even though I already did the video marathon, I’ve pulled out the books and The Kid and I have decided to reread them.  I know there’s a ton of stuff that was left out of the movies and since I haven’t read the final book since it was released (read it in 6 hours right after the midnight release, then reread it slower), I’m sure I’ll be surprised a time or two. 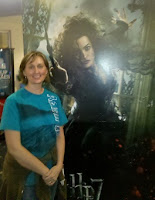 The Kid is headed off to camp again and I promised him I’d wait til he gets back to watch the movie again.  So until then, I’ll print my Harry Potter picture and lurk on YouTube as people post videos like the one below… 🙂
Enjoy!
Tami