Categories
Tags
***Woohoo! And we have a winner of the $10 Amazon Gift Card.  Hildie drew a name early this morning and Pamela Mason is the lucky winner!***

Pamela, shoot me an e-mail and I’ll send your contact information to Hildie. And a HUGE thank you to all those who ended up sleeping with the lights on. 🙂

By Hildie McQueen
At first Amy didn’t give the crimson rose on the porch much thought. Her neighbor Mr. Daly grew them and often gifted her beautiful flowers.
She picked the bud up and carried it into the house.  Once inside she wondered at Mr. Daly leaving the flower. He usually ensured she was home before coming over so that she could place them in water right away.
She flicked the television on and drew water into a tall slender vase before dropping the stem into it.  The newscaster droned in the background as she kicked off her pumps and lifted a wine bottled to inspect the label.  Out of the corner of her eye, she caught the camera zoom in on a rose on the television screen.  By the time she focused, the reporter was on to the next story.  The rose killer had killed again no doubt.  Amy shook her head, saddened to think of the poor woman’s relatives and what they were coping with right now.
When she turned to reach for a wine glass, the rose on the counter caught her attention and she froze.  She’d never seen roses in Mr. Daly’s garden that shade.
She backed away from the counter, the flower creeping her out.  The darkness outside her kitchen windows prevented her from seeing clearly to the back yard, yet she strained attempting to look outside.
It was ridiculous, she was over-reacting. She’d call Mr. Daly and ask him if he’d dropped a rose on her porch.  Her cell lay on the dining room table, and she eyed the back door nervously before moving toward it.  Lunging for the phone, she let out a breath of relief when her fingers curled around it.
Just then a hard knock at her back door startled a scream out of her.  Her gaze jerked to it and she relaxed at seeing Mr. Daly’s face peering back at her.  She opened the door and he walked in.
“I’m sorry, I didn’t mean to startle you dear but Edith sent me to bring you a piece of this pie she made.” The older man smiled at her, only to become serious at spotting the dark rose on her counter.  “Where did you get that rose?” He neared the flower.  “This is the most beautiful shade I’ve ever seen.” His awe-filled words shook Amy even more.
“I thought you dropped it on my porch.”
Mr. Daly shook his head seeming to notice her nervousness.  “I’ll check the house, you stay here and keep that cell phone in your hand.”  He left going toward her bedrooms.
Only a few moments later he came back.  “There’s no one here, maybe you have an admirer.” She tried to smile, but it was obviously not convincing. Mr. Daly patted her shoulder.  “Why don’t you pack a few things and come stay with Edith and I?”
Feeling foolish, Amy shook her head. “It’s okay Mr. Daly, I’ll keep the cell with me.  You are just a few feet away.  I’ll be fine.”  She showed him to the door.
An hour later, Amy prepared for bed. After washing her face and brushing her teeth, she went toward the bed.  She froze in the doorway. A fresh crimson rose lay on her pillow.
She stumbled back her hand over her mouth as she forced herself to remain calm.  Her cell phone lay in the middle of the bed not on the nightstand, where she’d left it.  She scanned the room half expecting someone to materialize, but it was empty.
The silence of the house became oppressing, Amy strained to hear a sound, but there were none.  Where was he?  Why hadn’t Mr. Daly seen him?
She took a tentative step toward the bed, but froze when spotting a shadow in the hallway.  Amy shrunk back into the bathroom and bumped into a person.
Her screamed tore through the silence at seeing Edith Daly holding another rose.  “Sorry dear, but it’s your turn.”
Terror beyond words lodged in her throat, and Amy moved away not able to tear her eyes from the woman’s demented smiling face.  “You are the Rose Killer?”
“No I am,” Mr. Daly materialized behind her, a pair of rose pruners in his hand.
~~~
Oh man, Hildie!  I’m sleeping with the lights on tonight.  If there are any roses even in the vicinity of my house, I’m outa there. 🙂
If you enjoyed this spooky story, Hildie is featuring a special scary post today on her blog.  Hop on over and check it out. But only if dare…

As an added bonus, Hildie is offering a $10 Amazon gift card to one lucky commenter.  Just leave a comment in the comments section on this post and she will draw the winning name after midnight tonight.
About the author: 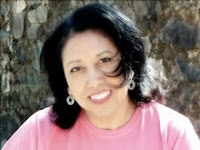 Cynden Frasier (Cyn) is a member of a group of immortal warriors, the Protectors, assigned to protect humans in Atlanta, Georgia, the epicenter of a major uprising in demon activity. When Cyn is approached by a beautiful woman in a dirty alley, he is intrigued by the fact that she can see him for what he is, a terrifying demon slayer, and still dares to approach him.
Emma Blake, a half-demon, has to convince Cyn to help rescue her sister from powerful demons. Terrified that the Protector will kill her if he realizes what she is, she still goes against every instinct and approaches Cyn for help. Despite knowing that she is leading them both into territory so wrought with treachery, neither of them may survive.
Can Cyn and Emma overcome betrayal, the ancient rules that prevent Protectors from taking a wife, unless she is his one true mate? And if they do, will it even matter?
Share
0