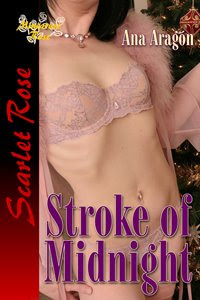 Stroke of Midnight by Ana Aragon

Ro Garcia is getting her life back together after a sudden divorce that has her giving up her Washington DC lifestyle, moving back to her hometown of Albuquerque, New Mexico and taking on a new job as the Assistant US Attorney. When she agrees to help her baby sister with her first catering job, she has no idea that she’s about to come face to face with a past relationship she’d hoped would stay forgotten. But Jake Anderson apparently has other ideas.

Rosie was Jake’s dream come true. Too bad she left him high and dry ten years ago. But he really couldn’t blame the girl. After the humiliating scene his father made when he caught them in the middle of one of the best night of Jake’s life, Rosie had left before he could explain how he felt about her. By the time he’d been able to track her down, her family informed him she’d left Albuquerque altogether. With no way of finding her, he’d done his best to put the experience into the past. Until now.

Still embarrassed from that night so long ago, Ro tries to keep Jake at arms distance. But it doesn’t appear that Jake is willing to do that and with the sexual energy sparking between them, Ro isn’t so sure that she wants to either. Thinking she can tamp down the fire that erupts each time they’re together, Ro finally gives in to the chemistry blazing between them. But once she’s had a taste of the passion still alive between them, can she give it up again? Will she continue to let misunderstandings keep them apart like they did ten years earlier?

Warning – – Stoke of Midnight is a smoking hot, sexy read!

I’d read several positive reviews about Ana Aragon’s Stroke of Midnight and I just had to check it out for myself. I was warned it was a very hot read, which grabbed my interest all the more. After just the first 20 pages into the story, I readily admit that I was not disappointed with the reviews. Ms. Aragon set my computer screen on fire. The sexual tension between Jake and Ro was enough to keep me scrolling through the story to the very end. The characters were likable and relatable. I found myself smiling each time Ro’s little sister stepped in and thwarted Ro’s attempt at putting Jake in his place. This is a fabulous character driven story and the love scenes are literally blazing with passion. If you haven’t read an Ana Aragon book yet, you are definitely missing out. Great job Ana!