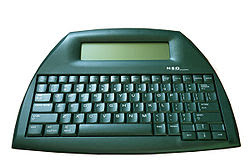 I’ve been writing on my AlphaSmart 3000. If you are a writer and haven’t heard of this little word processing unit, you are truly missing out. Wikipedia describes this as follows:

Designers removed the ADB and PS/2 ports, replacing them with a USB port and a mini-DIN-8 serial port that allowed users to plug the AlphaSmart directly into a printer. Also new was the SmartApplet architecture that was capable of extending the simple functionality of an AlphaSmart with the inclusion of SmartApplets—miniature software applications that extend the AlphaSmart’s functionality to give it features beyond basic word processing. For example, it included a simple 5-function calculator. Additionally, the battery life and memory were increased (although it still ran on 3 AA batteries), and cut/copy/paste functions were introduced. The original rechargeable NiCad battery pack was not compatible with this model. Instead, it used a new optional nickel metal hydride battery (NiMH) pack that lasted longer and eliminated the memory effect of NiCad batteries. The AlphaSmart 3000 had the customary 8 files, each with a capacity of 12.5 pages (about 25 kilobytes), for a total of 100 pages altogether.

AlphaSmart announced the discontinuation of the AlphaSmart on April 30, 2006.[3]

As you can see, my unit was discontinued for the more popular NEO (pictured above). I happen to like mine more, though, because I can’t access the internet with it. I like how lightweight the unit is and how I can take it virtually anywhere. In fact, I’ve been using it during my son’s swim practices. It’s great. No Facebook. No e-mail. No blog. So this is prime writing time for me.